A while back, as we were discussing photo-gear (see here), I ventured to write that, in a not too distant future, I would be looking at top end phones, and perhaps, go the minimalist root, for my Urbexing.

Discretion, lightweight. All that and a flash light. Roughly 6 month ago, I broke my piggy bank and bought a 1000 dollar phone, with the express purpose of Urbexin’ with it.

I was looking for decent glass, a not too small sensor, and a bit of computing power allowing for a few technological prowesses, such at shooting in almost complete darkness, as Urbexes often require .

Out of the half dozen choices of competent phones on offer, I ended up buying a Huawei P20 pro, with a bit of Leica know-how, a pretty big physical sensor at 1/1.7″ and three lenses: 40 MP (RGB, f/1.8 aperture) + 20 MP (Monochrome, f/1.6 aperture) + 8 MP (Telephoto, f/2.4 aperture). The phone uses Huawei’s A.I.driven stabilization system, allowing me to shoot in almost complete darkness. Night mode actually takes a series of bracketed exposures and then combines them into one photo that appear notably brighter and less noisy than a normal single exposure.

Oh, and it shoots in RAW.

Some people told me to be careful about data theft with this product, as it’s Chinese. Personally, I couldn’t care less if it was from Papua-New-Guinea. This is just a well done piece of kit.

Anyway, my understanding is that spying on us, here in the west, is mainly the job of Echelon, the NSA and Facebook, but when it comes to fucking around people’s privacy, I believe in equal opportunity for all nations. More seriously, I trust this scare mongering tactic has more to do with trade competition, then any sort of spying issues.

Of course, I could be wrong. It wouldn’t be the first time. 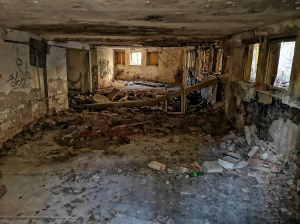 Anyway, back to that marvelous piece of tech, they still call a phone. My P20 Pro, has more calculating power then all Apollo missions stitched together: 2.36 GHZ octacore. It has a whooping 6 gig of ram, 128 GB of built in storage and it shoots very decent 8 to 40 mega pixels photos with its tri-lens camera, in almost any situation. It is rugged. Both water and dust resistant and its battery is an amazing 4000 ma. Last but not least, its 6.1 inches, 1080×2240 screen is a game changer when I use my drone.(see here)

To use very technical language, that shit is amazing.

No longer do I see a place and think, “I must come back with my Nikon”; My phone is always on me. Ready to go.

Better yet, if I am on a trip with no access to a computer for a while, I can even do a bit of post production on the go as this thing can actually run Photoshop express.

Don’t get me wrong, if one of my pictures was to be featured on a 25 square feet poster, I’d probably revert back to my trusty DSLR. But for regular size images and use on social media, it is more then sufficient.

Oh, and it also allows me to actually CALL people. Batshit unbelievebale…I know.

My only true beef is that I really wish the artificial intelligence chip was used in a more professional manner as opposed to the consumer-style “we know better than you” that was implemented. However, you can overide it all, with the 100% manual pro mode.

On a final note, if you’re really paranoid about China, have a MAGA hat and think America should be made great again, I’ve heard very decent things abut the Pixel 3 and the Samsung S10, but I haven’t tried them out in the field. On the other hand, my friend’s feedback is that the latest Apple flagship phones are not even coming close.

But then again, Huawei hasn’t given me any money yet, so…shop around (wink wink, Huawei people are u there ?).